Skin cancer is a general term for three distinct cancers that can appear on the foot: melanoma, basal cell carcinoma and squamous cell carcinoma.

Basal cell carcinoma, the most common type of skin cancer, appears on sun-exposed areas as a smooth, raised bump or a sore that is not healing. It rarely metastasizes or causes death because it grows slowly and rarely spreads. It is easily treated with surgery or radiation.

Squamous cell carcinoma appears on sun-exposed areas as thick, red, scaly patches or as a bleeding ulcer. It is more serious than basal cell carcinoma because in some instances, it may spread to other areas of the body.

Melanoma, the most serious skin cancer, begins in the cells of the skin that produce pigmentation (coloration) and spreads to other areas of the body as it grows beneath the surface of the skin. Read more about malignant melanoma of the foot here.

Treatment of skin cancer, which varies depending on its type and location and the age of the patient, may include chemotherapy, radiation and surgical excision.  Referral to an oncologist  may be necessary. 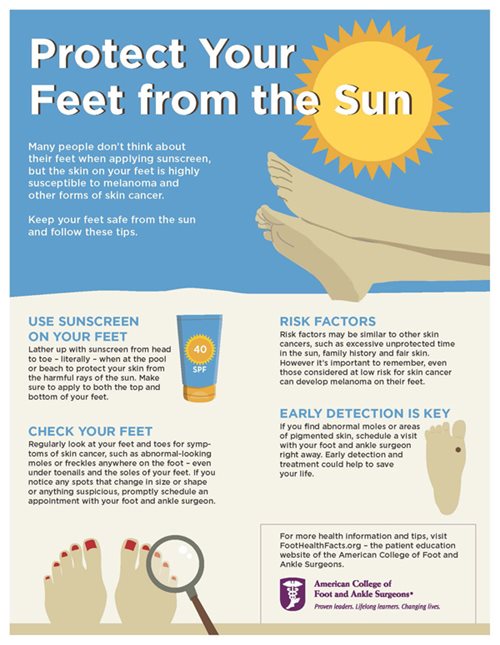 What Is Malignant Melanoma?

Melanoma is a cancer that begins in the cells of the skin that produce pigmentation (coloration). It is also called malignant melanoma because it spreads to other areas of the body as it grows beneath the surface of the skin. Unlike many other types of cancer, melanoma strikes people of all age groups, even the young.

Melanoma in the Foot

Melanoma that occurs in the foot or ankle often goes unnoticed during its earliest stage, when it would be more easily treated. By the time melanoma of the foot or ankle is diagnosed, it frequently has progressed to an advanced stage, accounting for a higher mortality rate. This makes it extremely important to follow prevention and early detection measures involving the feet as well as other parts of the body.

Anyone can get melanoma, but some factors put a person at greater risk for developing this type of cancer. These include:

What Should You Look For?

Melanoma can occur anywhere on the skin, even in areas of the body not exposed to the sun. Melanoma usually looks like a spot on the skin that is predominantly brown, black, or blue, although in some cases, it can be mostly red or even white. However, not all areas of discoloration on the skin are melanoma.

There are four signs—known as the ABCDs of melanoma—to look for when self-inspecting moles and other spots on the body:

Asymmetry — Melanoma is usually asymmetric, which means one half is different in shape from the other half.

Color — Melanoma is typically a mix of colors or hues, rather than a single, solid color.

Diameter — Melanoma grows in diameter, whereas moles remain small. A spot that is larger than 5 millimeters (the size of a pencil eraser) is cause for concern.

If any of these signs are present on the foot, it is important to see a foot and ankle surgeon right away. It is also essential to see a surgeon if there is discoloration of any size underneath a toenail (unless the discoloration was caused by trauma, such as stubbing a toe or having something fall on it).

To diagnose melanoma, the foot and ankle surgeon will ask the patient a few questions. For example: Is the spot old or new? Have you noticed any changes in size or color? If so, how rapidly has this change occurred?

Everyone should practice strategies that can help prevent melanoma, or at least aid in early detection, so that early treatment can be undertaken.

Precautions to avoid getting melanoma of the foot and ankle, as well as general precautions, include:

Remember: Early detection is crucial with malignant melanoma. If you see any of the ABCD signs—or if you have discoloration beneath a toenail that is unrelated to trauma—be sure to visit a foot and ankle surgeon as soon as possible.